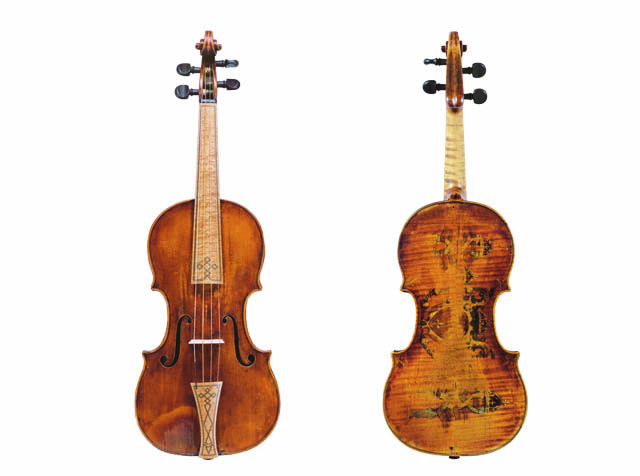 All that remains of the original instrument are the back and thesides. Inside the instrument is a manuscript label, clearly very oldand difficult to read, with the following text: «St. Salvator Novara /T.Antonius Tarotanusj / facjebat MDC».The back is in two pieces of maple. In the upper bouts a horizontal cut delimits a substituted portion of the back. It is possible that such a substitution was necessary due to accidental damage, but the position of this cut is also compatible with the hypothesis that the instrument was originally a viola da gamba, or similar instrument, with a bend in the back.The back has a polychrome decoration still in good condition. In the center, a seal with three fleurs-de-lys emblem of the French royalty framed by a floral festoon, in turn, surrounded by gold cordon that terminates in the lowermost point with a seal bearing the symbol of the Order of Saint Michael. Above the entire decoration rests a golden crown with black areas. On either side of the central decoration should be two painted letters surmounted by crowns, but of smaller dimension. The two figures have been obliterated but one can still make out the crown to the left of the central ornament. What remains of the letters appears to be compatible with either a “C” or a “G”, certainly not a “K”. The composition of the decoration is completed on each side by pairs of intertwined columns posing on tall plinths in turn supported by pedestals of minor thickness. Each pair of columns are of a different color –very likely in origin, one gold and one silver – and, in the uppermost part, they support a crown similar in material and design to the one in the central ornament but of different proportions – taller and narrower. The columns are wrapped in a banner that in the lower turn bore the royal motto “PIETATE ET IVSTICIA” – still partially legible oneither side.At each corner and at the maximum extremities of the upper and lower bouts, immediately inside the purfling, there were painted gold fleurs-de-lys – of which a part are still well preserved. Even if not identical, for the quality of execution and the general layout the decoration is very similar to that of the violoncello “Berger”, both of which differ from the other instruments of “Charles IX” for the absence of allegoric figures, the pairs of entwined columns, the absence of putti above the columns and the different position of the letters surmounted by crowns and, in the end, the choice of the letters themselves. The sides were originally decorated, but little remains; only on the uppertreble rib, near the neck block, one can read the letters “TAT”. Itis plausible that the rib in question was not originally in this position.The letters are situated between two simple lines above and below.Atthe center of the C bouts these two lines interweave to form a simplebut elegant geometric pattern similar to that on the Sabatier violin andto the two decorated instruments with the motto “PROPVGNACVLO”from the National Music Museum (violin NMM3366 and viola NMM 3370). The sequence “TAT” is present in both mottos, in the word “pietate”and in “stat” and, for this reason, compatible with both texts: even though, the collocation of the three letters in the upper treble rib is not easily justifiable.The instrument was sold at the London auction house of Christie’s on11 November 1986. Previously, it had been studied by the commissionof Swiss experts and the results of their investigations were published in the beginning of their volume on Cremonese violinmaking.