In the mid 17th century, Cremonese violin making had a history of one hundred years and was already famed all over Europe. The main workshop in the city at the time, the one of the Amati family, was well known and fully flourishing.
A few years later, during the last decades of the century, Cremona could count the workshops of Amati, Guarneri, Ruggeri and, of course, Stradivari. Local violin making had developed fast, as it is clear from the fact that just a few years before the only Nicolò Amati was active in Cremona, and it was thanks to his workshop that new generations of violin makers were trained. In those years, Antonio Stradivari completed his earlier decorated violins: the “Sunrise” in 1677 and the “Hellier” two years later.
We do not know for whom these special instruments were made; however, they prove that the workshop of Stradivari was highly successful since its beginnings and had the patronage of important customers. Furthermore, the extremely high quality of  the violin’s inlaid and decoration works reveals the extraordinary technical and manual skills which the luthier was able to employ to the highest degree and for the benefit of all those who, still today, can admire the masterpieces that he made more than three hundred years ago.

The “Sunrise”, 1677, is the oldest of the 10 inlaid instruments that we know today; it is not sure whether its name hinted at the auroral reflections of the varnish or at the first expression of its maker’s talent. The instrument still has its original neck which was lenghthened in order to be played with the modern violin technique; however, traces of the orginal decorations are still visible near the soundboard. Philippe Bovet, owner of the Peugeot Motor Cars Company and his son Jean, violinist, were among the past proprietors of the violin. 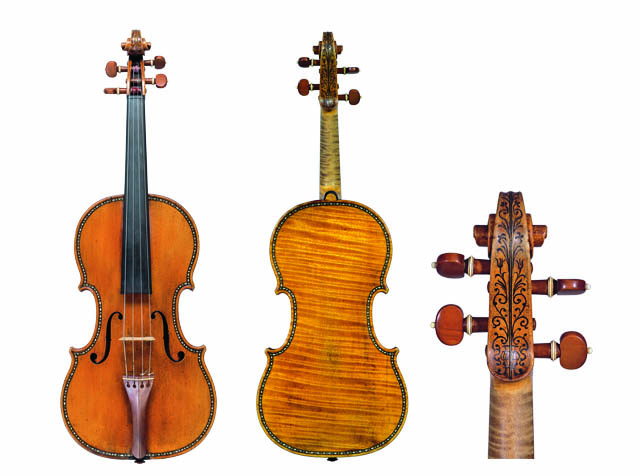 The “Hellier” – named after the British nobleman who purchased it directly from Stradivari in 1734 – was made only two years later but it anticipated models and sound qualities which characterised the golden age of the maker’s production.
The ribs of the two violins are decorated with inlays made with ebony filings and glue.
The models used for the decorations are the same for both instruments and typically appear on late 17th-century violins.
The ornamentation with stylised vines repeating floral motifs is enriched with flowers, berries and serpents. The top and back plates are embellished with a double purfling which outlines a refined geometric motif of roundels and lozenges.
Stradivari reduced figurative elements to their essential lines so as to enhance the fine elegance of the decoration. Only at the beginning of the 18th century he would add animal figures and choose a more vigorous trait in order to give a distinct plastic quality to the composition.