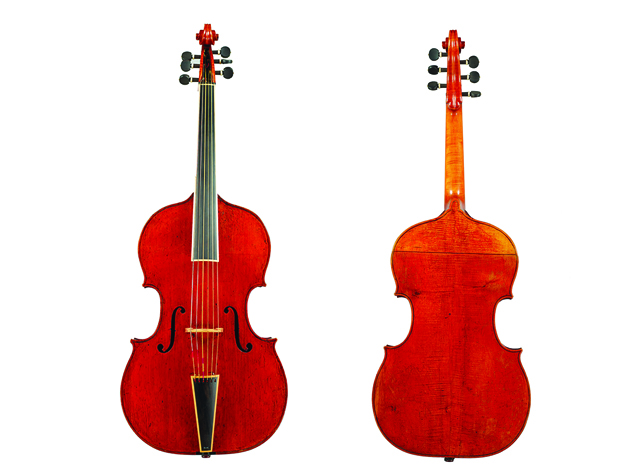 Cremona 1702. Giuseppe Guarneri was the only person working in his father workshop, who had died 4 years before and he had been buried in Chapel of Rosary in the Church of San Domenico in Cremona. Antonio Stradivari was buried in the same Chapel in 1737. Giuseppe’s brother, Pietro, lived and worked in Mantua, where he had moved to few years before. Pietro and Giuseppe’s father, Andrea Guarneri, who didn’t support his son’s decision to leave, in 1692 in his will indicated Giuseppe, the most faithful son, as his only heir. The inheritance consisted in tools, woods, and other tools for making violins, guitars…

That’s how we learnt about the Guarneri family activity as guitar makers, even though nowadays there isn’t any Guarneri guitar; for what concerns the gambas family, the bass size bass-viol made in 1702 is one of the very rare sample of the Cremonese school. In some cases, these kind of instruments have been modified , for example that’s what happened to the bass-viol, supposedly made by Antonio Stradivari in 1730. This bass-viol is now exhibited in the National Music Museum, Vermillion, South Dakota. Now it is tuned with four strings, like a cello. The border of this instrument’s body was modified.

Luckily, the bass viol made by Giuseppe Guarneri, excluding the viol’s head, that was previously substituted, kept the original instrument’s features. Comparing this bass viol or the tenor viol made by Girolamo Amati in 1611, now part of the National Collection of Musical instruments of Moscow, it’s possible to see the close link between Guarneri’s work and the Amati family’s work. This is just a further confirmation of the roots of the tradition of the Cremonese violinmaking.

We don’t know anything about the history of the instrument. Probably in the last century it was owned by the Hill family, until it was purchased by the Beare Violins Limited in more recent times.