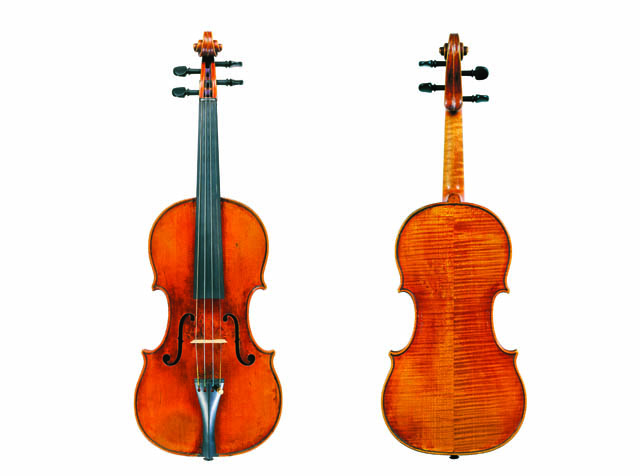 This violin is a characteristic example of the productions that left the Amati workshop in the years just prior to the death of Nicolò in 1684. Although it bears an original label of Nicolò, one can see throughout the ‘hand’ of his son Girolamo II (b.1649). Nicolò was still the Master of the bottega and, at that time, it was normal practice that his label be glued into any worthy instrument produced there. The violin has miraculously come down to us with an unusually generous and uncontaminated quantity of original varnish that has not been over-polished. It furthermore reveals, to the critical eye, a freshness of execution which reflects Girolamo’s youthful but already mature abilities at 34 years of age.

The front is of two unmatched pieces of spruce and one small ‘wing’ is visible in the lower treble bout. The sound holes are very upright and the openings are slender with well-rounded central notches. The maple back, even though of two pieces, has the flame oriented to the same slant as if it were of one piece: an often seen preference in Amati instruments.

The violin has a brief history. It formed part of a donation to the Civic Museum of ‘Castello Ursino’, of Catania in Sicily, by the influential Catanese family, Zappalà. Through local Catanese sponsorship a careful restoration was carried out in Cremona.

Later, the violin was highly admired at Cremona in the exhibitions …and they made violins in Cremona from the Renaissance to the Romantic Era (2000) and il DNA degli Amati (2007).