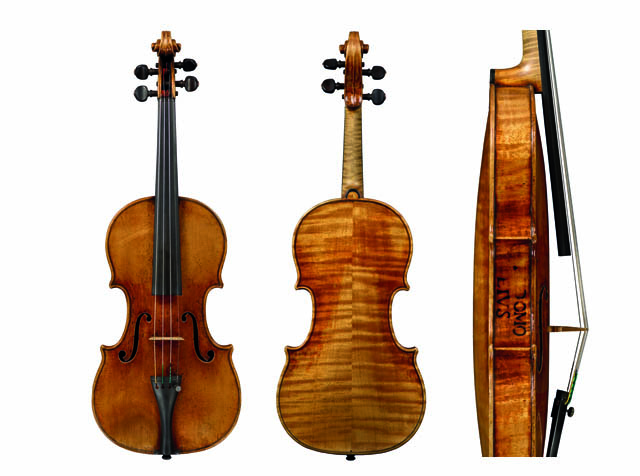 The ‘San Lorenzo’ is a rare violin made by the Cremonese luthier, Antonio Stradivari. It bears his original label from 1718 and is a handsome example of Stradivari’s ‘golden period’ work. Generously spaced annual rings on the spruce top narrow markedly as they approach the centre joint. A two-piece back of the finest acoustic maple has wide horizontal flames matching the sides and scroll. Made on Stradivari’s G form, the ‘San Lorenzo’ has the broadest proportions found in this period and a sweeping sound-hole placement further enlarges its acoustic centre. A luminous golden ground shows through deep-orange varnish and glows in a swathe on the back where the varnish is missing. Its most distinctive feature is a curious Latin inscription, penned in metallic organic ink, probably iron gall, over the varnish of the centre bout ribs, which makes the instrument unique amongst Stradivari’s work. The Provenance of the ‘San Lorenzo’ is equally colourful. A shiny new Cremonese violin, crafted by the great Antonio Stradivari, and inscribed with the biblical blessing “Gloria et divitiae in domo eius”, would have been a most splendid wedding gift for the first known owner of this exceptional violin. Mauro D’Alay was a celebrated violinist who did indeed marry shortly before it was completed. The Latin phrase meaning “Glory and Wealth, Be in His House” was well known in Renaissance times as a blessing for abundance and prosperity. But historians are not sure if this Stradivari was actually a wedding gift or if D’Alay was really its first owner. A 1775 letter written by Paolo Stradivari asserts that Mauro D’Alay purchased the instrument for himself -and from Stradivari’s oldest son, Francesco. Antonio was fully in command of his business affairs when the violin was finished in 1718. Had it been purchased from Francesco, it would likely have been during the years following Antonio’s death in 1737, when Francesco ran the business. During those same years, from 1739 to 1747, Mauro D’Alay was amassing a considerable fortune as court violinist for King Philip V, the ailing husband of his fellow Parmesan Elisabetta Farnese, the Queen of Spain. He is known to have begun collecting paintings and other art with his newfound wealth, guided perhaps by his friendship with the celebrated Italian castrato singer Carlo Broschi, also known as ‘Farinelli’, who also served the Spanish Court and is said to have owned a Stradivari of his own. All this fits with Paolo Stradivari’s letter and the notion of some 20 years passing post-completion of the ‘San Lorenzo’ before D’Alay acquired his violin. With time, we may still learn for whom the dedication on the ‘San Lorenzo’ was inscribed. Upon his death in 1757, D’Alay left his violin to the Constantinian knights stationed in Parma at the Basilica of St. Mary of the Steccata in exchange for prayers for his soul and for the soul of his ex-mistress, the beloved Italian mezzosoprano, Faustina Bordoni. The intriguing journey of this violin continued from Italy to England and the virtuoso Giovanni Battista Viotti before arriving in 1823 to the Third Duke of San Lorenzo, whose name the instrument now bears. For the next 80 years, this family cared for the violin at their Spanish castle in Jerez de la Frontera before, somewhat unceremoniously, it transitioned to a German railway engineer and important collector, Georg Talbot from Aachen. In recent years, the 1718 ‘San Lorenzo’ is cherished in Japan as a prized part of the Munetsugu Collection. In celebration of its 300th anniversary, the violin returned to its city of origin for study at Cremona’s Museo del Violino – Arvedi Laboratory of noninvasive diagnostics, in preparation for special twin exhibitions featured it in Cremona and Tokyo in 2018. Indeed, glory and a wealth of knowledge and enjoyment seem to have followed the 1718 ‘San Lorenzo’ Stradivari in is long journey