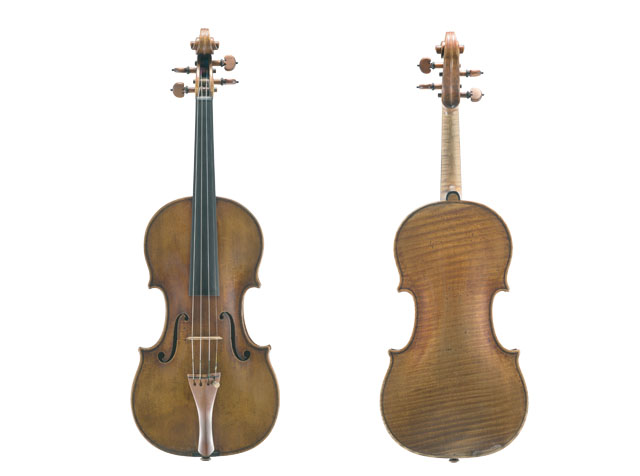 Cremona 1720, “ex Bavarian”
bearing its original label “Antonius Stradivarius Cremonenis faciebat anno 1726”
The table of this instrument is made from two pieces of spruce with a fine, even grain, and the back is molded from one piece of curly, medium-width maple. The reddish-orange varnish covers a golden-yellow ground. The figure extends slightly upward from the left to the right.
Exquisitely preserved, the instrument is an example of the maker’s Golden Period work. The violin bears a strong resemblance to the ex-“Beckerath” Stradivari, which was created the same year.
The Royal House of Bavaria acquired the violin during the early 19th Century. There it formed part of a fine collection that also included another Stradivarius violin from 1709, now known as the King Maximilian, named for the Bavarian monarch who reigned from 1848 to 1864.
King Ludwig II, who reigned from 1864-1886 and was later named The Mad King, presented the Stradivarius to Professor Benno Walter of Munich in 1870. When Walter passed away in 1901, Monsieur Jean Louis Courvosier retained possession of the violin until 1924. At that time, collector T.C. Peterson of Berkeley, California acquired the instrument. Peterson sold the Bavarian in 1928 to Henri Verbrugghen, Belgian violinist and conductor who headed the Minneapolis Symphony Orchestra. His son, Dr. Adrian Verbrugghen, eventually inherited the instrument.
Mrs. Alice de Belmont of New York later purchased the instrument through Emil Herrmann, who subsequently acquired it back again. The instrument was played by world renowned artists during the 1937 Stradivari Memorial Concert at Carnegie Hall commemorating the bi-centennial of Stradivarius’ death.
New York concert violinist Maurice Wilk purchased the violin from Rembert Wurlitzer’s firm. Subsequently, it was sold to amateur player and collector Dr. F.A. Lehmann of Mexico. He later entrusted it to Miami’s Harry Duffy for sale. The violin was then bought by Mr. Alfred Hermann of Switzerland in 1975, through Heinz-Joachim Machold. Harry Duffy acquired it from Hermann’s estate, and it was subsequently obtained by the collector, Sau-Wing Lam.

Displayed in  the exhibition “Rare Italian Stringed Instruments from the Sau-Wing Lam Collection” at the Metropolitan Museum of Art, New York, until June, 30th.