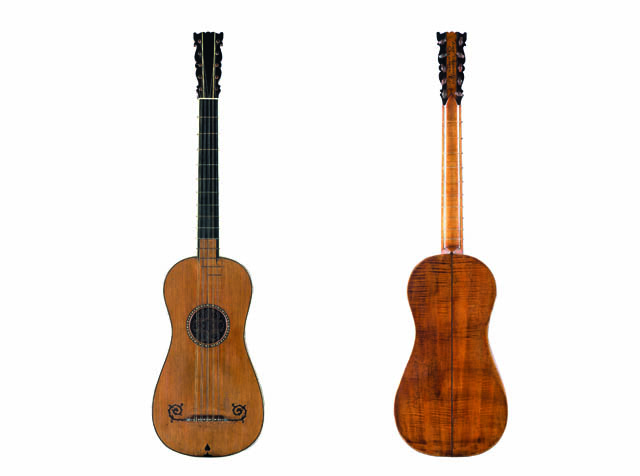 The “Sabionari” is one of five Stradivari guitars known today. It is perfectly preserved and contemporary to the early painted violins – “Sunrise” and “Hellier”.

At the beginning of the XIX century, like many other baroque guitars, it had been redesigned to follow the instrumental practice. Recently it has been restored to the original baroque configuration with five double strings and, unique in the world, it can be played, taking delight in listening to a Stradivari guitar three centuries after its construction.
Owned by a private collector, the guitar is presented by “Friends of Stradivari”.

On 5th december 1948 the Domenichini family brought the guitar to the X Guitar Conference in Bologna where the famous guitarist Andrès Segovia was going to attend. Segovia was shown the guitar and after thorough examination he declared: “Original!” and placed his signature in the inside of the body: “Two centuries later A.Segovia Bologna 1948”. Segovia must have been calculating the time since the death of Antonio Stradivari.
In the website (http://www.chitarrainitalia.it/inglese/Convegno_10.htm) there is a full report of that day.
The first photo (source: Fondazione Cineteca di Bologna) describes this event. At the center of the photo Andres Segovia, handling the Sabionari Guitar, improvises a small conference about baroque guitars.
In the second photo, the signature, presently hidden by the rosette. We have no news about other guitars signed by Andrès Segovia.