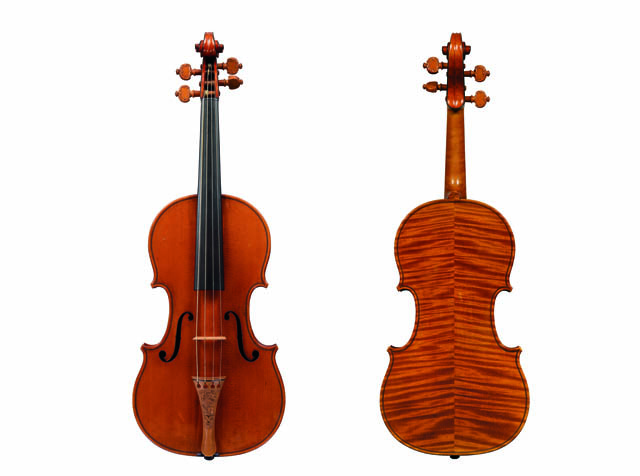 In 1716 Stradivari created the violin that 150 years later would be named the “Messie”. It is assumed that the “Messie”was built using the mould marked with the initials “P” or the mould marked with the initials  “PG” from 1705 exhibited at the Museo del Violino. Due to a series of fortunate circumstances, 300 years later the violin is still in perfect condition, as though it had just left the Maestro’s workshop. During the last three centuries it has only been played in very rare occasions. Antonio Straivari died in 1737. His youngest son, Paolo Stradivari (1708-1776) was a cloth merchant. After the death of his violinmaker brother Francesco, Paolo inherited the tools, moulds and drawings used by his father, as well as various instruments, probably including the “Messie”. In 1775-1776 Paolo sold the collection to Count Cozio di Salabue of Casale Monferrato. In the last years of his life, Count Cozio sold part of his collection to the dealer Luigi Tarisio (real name Teruggi), who was always looking for instruments to sell in Paris and London. During his trips to Paris, Tarisio would always talk about an extraordinary Stradivari, so wonderful that “you can only admire it on your knees. It has never been played and iti is as new as if it had come from the Maestro’s hands today.” One day the greatest violinist of the time, jean- Delphin Alard, said to him, “So basically your violin is like the Messiah of the Jew: it is always expected and never appears.” Ever since the violin has been called “Messie”. When Tarisio died, the violinmaker Jean-Baptiste Vuillaume, rushed to Tarisio’s hometown and bought the “Messie”. After many transfers of ownership, described in the catalogue written by Charles-Eugéne Gand in 1870, and transfers occurred after the catalogue was written, the Hills purchased the violin in 1904 and 1931. In 1939  W.E. Hills & Sons donated the violin “Messie” to the Ashmolean Museum of Oxford (UK), so that it be preserved “a yardstick for future violinmakers to learn from” on the condition it never been played and never leave the museum.