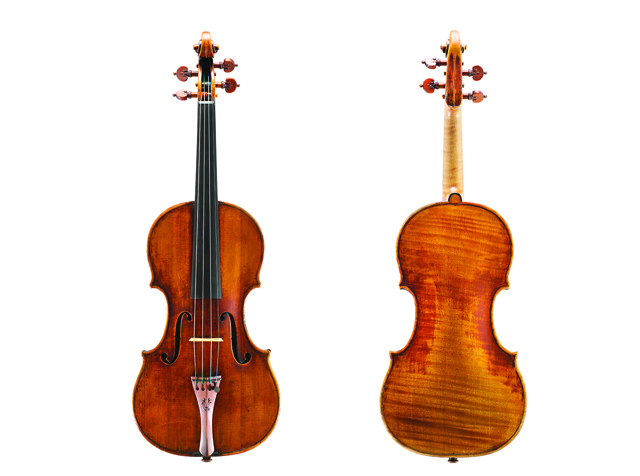 Un capolavoro scolpito dal talento e del temperamento del giovane Guarneri del Gesù
The back of this instrument is quarter-cut with handsome broad flames descending from the treble to the bass side; the top consists of two pieces of unmatched spruce with a narrow-grain center broadening slightly at the flanks. Plain maple was used far the upper ribs and the scroll, while handsome maple with a pronounced curl was used for the lower ribs.
Finely preserved with a rich brownish red varnish on a golden ground, the instrument exemplifies the maker’s early period work. The instrument displays certain unique features, such as two different pieces of spruce far the two halves of the table.
The earliest recorded owner, a man from an old Baltic family named Giese, acquired this violin sometime during the 19th century. Dr. Walter Sochaczewski of Brussels and later of Sao Paulo, Brazil, owned the instrument during the mid-1930’s after he purchased it from Wilhelm Hermann Hammig of Berlin. Sochaczewski kept it until 194-0, when E. Clem Wilson of Los Angeles took possession of the violin. Upon Wilson’s death, the violin passed on as part of his estate.
The instrument was then sold by New York’s Rembert Wurlitzer to Dorothy Powers Percival. Some time passed before Mrs. Percival decided to sell it, again through Rembert Wurlitzer’s firm, to Mr. Irving Levick of Buffalo, New York. It was subsequently purchased by California collector George Gade, who had also acquired the “Cessol” Stradivarius and some other exceptional instruments. This Guarneri then passed from Gade to a well-known Canadian artist, Steve Staryk, who concertized extensively with the instrument and made many recordings with it.
The Baltic Guarneri is photographed in color on the jacket of the record album, “Masters of the Bow, Baton Series.” It was selected for Walter Hamma’s 1964 book Meister Italienischer Geigenbaukunst, in which it is inaccurately dated 1730. In 1994, it was one of the twenty-five instruments featured in the ”Violin Masterpieces of Guarneri del Gesu” exhibition at the Metropolitan Museum of Art in New York City.Displayed in  the exhibition “Rare Italian Stringed Instruments from the Sau-Wing Lam Collection” at the Metropolitan Museum of Art, New York, until June, 30th.