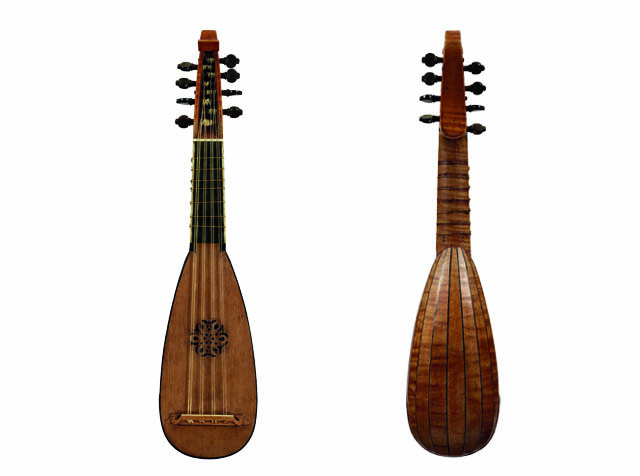 As well as guitars Stradivari made various other instruments in addition to those of the violin family. The Dalla Valle Collection contains numerous designs for viols, violas d’amore, a lute, a theorbo, and even a tromba marina, and among them are several for the bodies and necks of mandolins.

Only two Stradivari mandolins are known today, one of which, dated 1680, is in the National Music Museum at Vermillion, South Dakota, USA.  The other, exhibited here, is privately owned in England. Although all are very closely related, none of the designs for mandolin necks, pegboxes and finials in Cremona’s Dalla Valle Collection is an exact fit; however Stradivari’s slightly asymmetrical design for a table outline, marked ‛Mandolino coristo’, is a perfect match for the table of this instrument. The mandolin has four courses of two strings each (the ninth peg hole was added later).

The varnish of this instrument is characteristic of Stradivari in the early years of the eighteenth century. The bridge and pegs are modern, the former conforming to marks left on the table by the original bridge, and the pegs in the style of a damaged peg that has survived with the instrument. The wooden case, lined with patterned paper and covered with leather fixed with studs, has had some restoration but may be the original.

The mandolin has an unknown provenance but was in a museum before being sold at auction in New York in the 1970 without any attribution.